The Percurso dos Sete Vales Suspensos (Seven Hanging Valleys) is one of the most scenic hiking routes of the Algarve. This moderately challenging hike trail of 11.5km (round trip) follows the stunning coastline between Vale de Centianes (Carvoeiro) in the west and the Praia da Marinha to the east.

This is a dramatic coastline formed of massive limestone cliffs that have been savagely eroded to create deep sea caves, perilous sink holes and majestic sea arches. Within the golden cliffs, winter streams have carved out wide valleys (the “hanging Valleys”), in which secluded beaches are sheltered from the power of the ocean.

Alfanzina (200m inland from the lighthouse)

Benagil (on the route approximately half way)

Praia da Marinha beach bar at base of cliffs (seasonal)

Highlights along the seven valleys

• Farol de Alfanzina (more of a sight along the hike)

Is it worth doing ?

The Percurso dos Sete Vales Suspensos is an outstanding hiking route which encompasses some of the finest natural scenery of the central Algarve. The trail could be described as a little rough in certain sections and it certainly is not a beautiful finished footpath, but there are sufficient signs and well-worn paths not to get lost, or wander off the edge of a cliff…..

The length of the return hike means that it can be accomplished within one day, when a moderate pace is set, but expect it to take much longer as the wonderful sights are taken in or photographed. The glorious beaches at either end of the route (the Praia da Marinha at the west and the Praia do Vale Centeanes in the east) make for a worthwhile reward for the long hike.

Please gloss over this section if you have an ounce of common sense, but it has to be stated:

• Don’t try to swim to Benagil Caves, at least two tourists die each year from this surprisingly difficult swim.

• Many of the cliffs are sheer with precarious overhangs that are not always apparent from the top; always stick to the path and don’t risk a fatal slip for a selfie.

• If it’s hot, take enough water as there are surprisingly few locations to purchase water or boast energy with a coffee.

• We suggest extra care after heavy winter rains, as this is when cliff collapses are most likely.

• And never, ever try to cycle the path

What is the best season for the hike?

The Percurso dos Sete Vales Suspensos is best hiked during the spring or autumn, when the temperature is manageable. The spring months is when the plants of this harsh environment are in full bloom, whereas by the summer the flora has withered under the intense heat. This summer heat also significantly increases the challenge of the hike and is typically unsuitable for most tourists, an option for the summer is to divide the route into shorter, manageable sections.

Map of the Route

The hiking trail is well signed and the route is quiet easy to navigate as it just follows the coastline. For a detailed map of the region please click on the map her under :

The map is also provided by OpenStreetMap.com, which is an open source map project (similar ilk as Wikipedia) and provide some very accurate and detailed maps of Portugal. Best of all these free maps can be downloaded to your phone before the hike (so no need for internet connection while hiking). The phone app is called “OsmAnd” and can be found in the Android Playstore or Apple App Store; once the App is installed the Portuguese maps must be then downloaded.

Beaches along the route.

• Praia do Carvalho – beautiful beach, which is reached via tunnel (8/10) 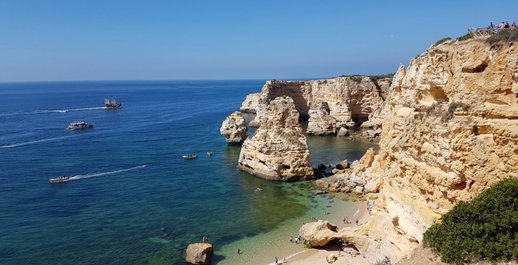